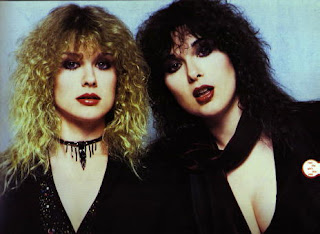 Heart is an American rock band who were formed in British Columbia, Canada in 1973. Throughout several lineup changes, the only two remaining members of the group are sisters Ann and Nancy Wilson. The group rose to fame in the 1970s with their music being influenced by hard rock as well as folk music.In 1977, Heart's record label, Mushroom Records, fueled rumors that Ann and Nancy were lesbian lovers by running a full-page ad in Rolling Stone showing the sisters bare-shouldered (as appearing on the "Dreamboat Annie" album cover) and suggestively captioned, "It was only our first time!" This was done without the sisters' permission and awareness. That was one of the main reasons why they left Mushroom Records and were signed to Epic Records. After diminishing in popularity for a couple of years in the early 80s, the band enjoyed a comeback in 1985, experiencing further successes with their power ballads and pop hits into the 90s. Over their four-decade career, Heart has had chart successes with songs in genres ranging from hard rock and metal to folk rock. With Jupiter's Darling (2004) and Red Velvet Car (2010), Heart made a return to their hard rock/acoustic roots of the late 70s. To date, Heart has sold over 35 million albums worldwide. Heart was ranked #57 on VH1's "100 Greatest Artists of Hard Rock". 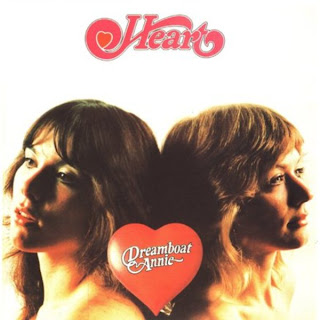 Dreamboat Annie is Heart's debut album, first released in 1975 in Canada by Mushroom Records and then released in the United States on February 14, 1976. Mushroom paid for an advertising campaign celebrating the sales of Dreamboat Annie which read "It was only our first time" and showing a photo of Ann & Nancy Wilson leaning up against each other with only heads and bare shoulders visible, as on the cover of the album. The band had not been consulted and was furious with this. Hence, relations were already strained when the group and the label tried to re-negotiate their contract. With the success of Dreamboat Annie, the group expected the label to raise their royalty rate substantially. However, Mushroom refused to pay more money and said it did not want to release a second Heart album. Placed in the position of presenting this unacceptable offer to the group, Flicker broke off negotiations with Mushroom. The group left the label, believing that their contract allowed them to do so as long as Flicker was no longer working with the label. Nevertheless, the album charted to #7 in the U.S. (Platinum disc) and earned 2 Platinum discs in Canada. Dreamboat Annie spawned the following singles: Crazy on You (#35 U.S., #25 Canada), Magic Man (#9 U.S., #26 Canada), Dreamboat Annie (#42 U.S., #53 Canada), and (Love Me Like Music) I'll Be Your Song. 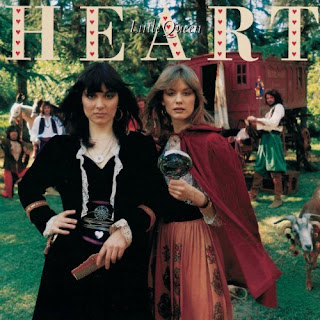 Little Queen is Heart's second studio album, released on May 14, 1977. The group intended Little Queen to be the official follow-up to the debut Dreamboat Annie. They had just left their first label Mushroom Records, for the new formed Portrait Records division of CBS Records (now Sony/BMG.) However the situation became very complicated when Mushroom decided to release a batch of studio demos and live recordings as the album Magazine at the same time as Little Queen. It also produced the band's most popular hit Barracuda, which Ann Wilson wrote after a controversial publicity stunt by Mushroom Records created about her and Nancy featured a full-page ad in Rolling Stone showing the sisters bare-shouldered (as appearing on the "Dreamboat Annie" album cover) and suggestively captioned "It was only our first time". When a reporter suggested, backstage after a live appearance, that the sisters were sex partners, Ann returned to her hotel room and began writing the lyrics to "Barracuda" to relieve her frustration. The song became one of Heart's biggest hits (#11, 1977). The album charted to #9 in the U.S. (3x Platinum discs) and earned 2 Platinum discs in Canada. The following singles were released: Barracuda (#11 U.S., #2 Canada), Little Queen (#62 U.S., #58 Canada), Kick It Out (#79 U.S., #67 Canada), and Love Alive. This album was reissued in 2004. 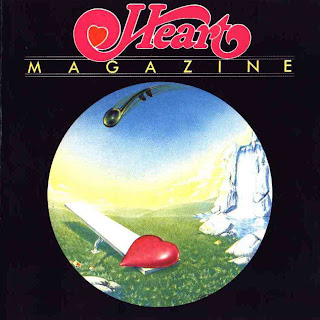 Magazine is Heart's third studio album, first released in 1977 and re-released on April 22, 1978. It has an unusual history in that the first release in 1977 was an unfinished version not authorized by the group. A second authorized version of the album was re-released in 1978. The change in labels resulted in a prolonged legal battle with Mushroom's creative director Shelly Siegel. Mushroom, still having a 2-album contract, claimed they had the legal right to release a second Heart album after all. Having retained ownership of the 5 unfinished studio recordings Mushroom had the recordings mixed by Heart's recording engineer, Rolf Henneman, but without the participation of any group members. The label also added Here Song, a rare b-side, and filled up the rest of the album with 2 live songs recorded in 1975 at "The Aquarius Tavern", a Seattle area rock club where the group had played regularly. Mushroom released the collection as Magazine in the spring of 1977 at the same time that the group was preparing their next album for Portrait titled Little Queen. According to Flicker, about 50,000 copies of the original Magazine album were pressed. Some of these copies were sold in stores, mostly in Los Angeles and Hollywood, Florida where the records were manufactured. Unsold copies were quickly recalled and later destroyed when Heart took Mushroom to court to stop distribution of the album. The 1977 version was also briefly released in Europe through Arista Records. Unhappy with the somewhat unpolished studio performances and the inclusion of the live recordings, the group took Mushroom to court with the aim of having the 1977 release of Magazine taken off the market. The Seattle court ruled that Mushroom had to recall the album, but the terms of the settlement required that Heart provide a second album for Mushroom. Heart chose to fulfill this obligation by finishing the previously released songs to a quality of their satisfaction. For the 1978 version Heart chose to re-record, remix, edit, and re-sequence the recordings. A security guard stood by in the studio to make sure that the group didn't try to erase the multitrack master tapes. They added new lead vocals to most of the existing studio tracks. One of the most obvious differences is that on the original recording of "Heartless" Ann Wilson sings "The doc said come back again next week..." On the re-recorded version she clearly sings "doctor" instead. In fact the entire vocal track on "Heartless" is notably more controlled in the original; the revision is oversung. The synthesizer solo on "Just the Wine" was replaced by a flute solo and the song is slightly edited. The ending of the title track fades about 30 seconds earlier. The live Blues Medley was edited to remove some of Roger Fisher's guitar solo sections and Ann Wilson's solo vocal parts. There are also other more subtle differences. The revised version of the album was released with no disclaimer by Mushroom Records in April 1978. The album peaked to #17 in the U.S. The only single taken from this album was Heartless (#24 U.S., #18 Canada). 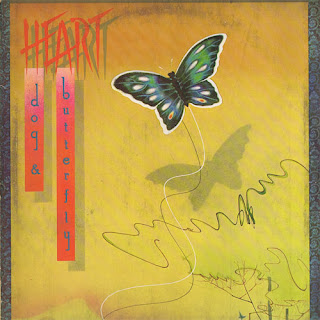 Dog & Butterfly is Heart's fourth studio album, released on October 7, 1978 through Portrait Records. The album was the 'proper' successor to 1977's hit Little Queen in terms of musical development and direction. As Heart themselves noted on the album's release, Side 1 was the "Dog" side, and was the more "rocking" compared to the "Butterfly" Side 2, which was all ballads, with the exception of the closer "Mistral Wind," which, in many ways, epitomized the trademark sound for which Heart would be remembered: folksy ballads shifting into searing hard rock explosions. Though the first song on the album "Cook with Fire" sounds like a live recording it was actually recorded in the studio. Audience sounds were overdubbed on the studio recording from a live performance. The album peaked to #17 in the U.S. (2x Platinum discs) and earned 1 Platinum disc in Canada. This album spawned the following singles: Straight On (#15 U.S., #14 Canada), and Dog & Butterfly (#34 U.S., #51 Canada). 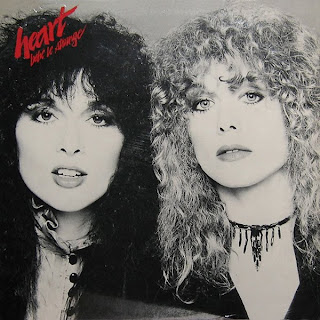 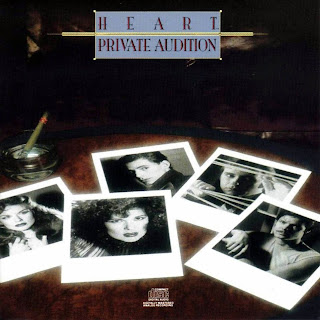 Private Audition is Heart's sixth studio album, released on June 5, 1982. It is the last Heart album to feature longtime members Mike DeRosier and Steve Fossen, who left after the recording of the album and were replaced by Denny Carmassi and Mark Andes. In 2009 Private Audition was rereleased on the Beat Goes On label as a double CD with Passionworks. Prior to this, Private Audition had been out of print for a number of years and was the most difficult of Heart's CDs to obtain. The album charted to #25 in the U.S. The following singles were released: This Man Is Mine (#33 U.S.), City's Burning (#15 U.S. Mainstream Rock charts), Bright Light Girl, and The Situation. 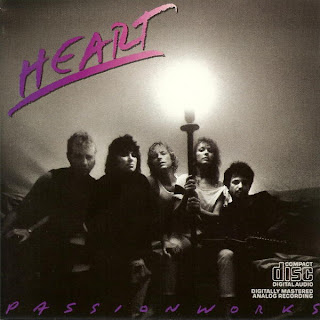 Privateworks is Heart's seventh studio album, released on August 20, 1983. The album marks a shift in musical direction from hard rock to power ballads. It turned out to be the band's final album with Epic Records, before their comeback-fueled move to Capitol Records. It is the first Heart album to feature Denny Carmassi and Mark Andes, who had replaced longtime members Mike DeRosier and Steve Fossen. In 2009 Passionworks was rereleased on the Beat Goes On label as a double CD with Private Audition. The album charted to #39 in the U.S. The following singles were released: How Can I Refuse? (#44 U.S.), Sleep Alone (#43 U.S. Mainstream Rock charts), and Allies (#83 U.S.). 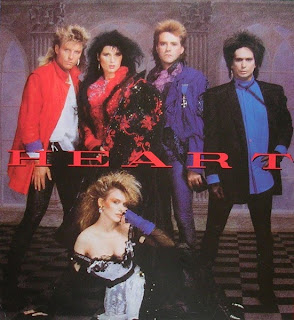 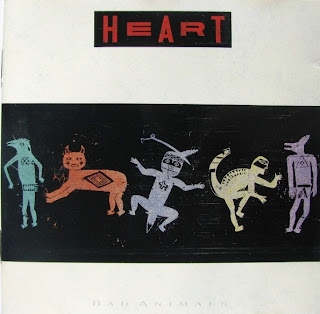 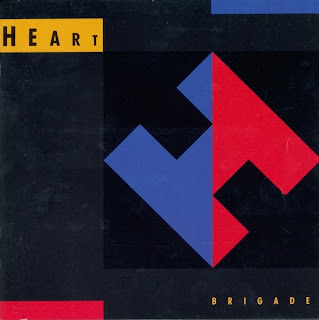 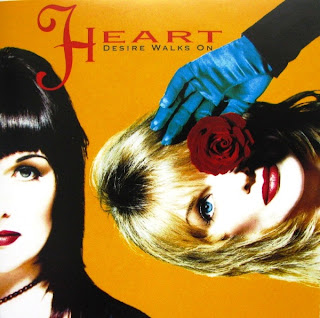 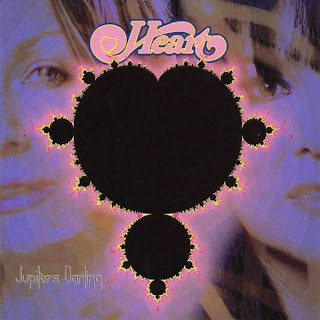 Jupiters Darling is Heart's twelfth studio album, released on June 22, 2004. This album marked a return to Heart's hard rock roots; The album cover bears an image of the Mandelbrot set, rotated so the main cardioid is oriented the same way a heart would normally be, with the cusp at top. The album cover art is seen briefly in the film Elizabethtown, for which Nancy Wilson did soundtrack music. Sovereign Artist's Marketing Director, Paul Angles, simultaneously released their album via file sharing networks which was included in an Amicus Brief to the US Supreme Court . The album peaked to #94 in the U.S. It sold roughly 100, 000 copies. Since then the Sovereign record company has filed bankruptcy and it has been reported (via band sources on www.heart-music.com) that Sovereign still owes Heart thousands of dollars. The following singles were released: The Perfect Goodbye, Oldest Story in the World (#22 U.S. Mainstream Rock charts), and Make Me. 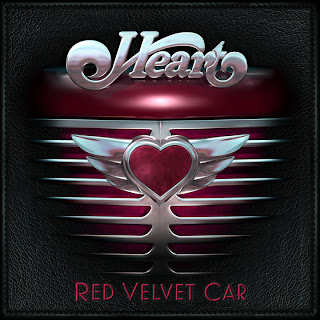 Red Velvet Car is Heart's thirteenth studio album, released on August 31, 2010. The album was released with differing track lists according to format in different territories: the standard US CD release features 10 tracks, the European CD and US download version contain 12 tracks, whilst the Japanese CD and some exclusive download versions contain 13 tracks. Though the 13th track is "Listening" on the Japanese CD, some exclusive download versions substitute this for a live 2010 version of "Crazy on You". The album charted to #10 in the U.S., making it the first Heart album to enter the Top 10 in 10 years. It also charted to #196 in the U.K. The following singles were released: Hey You (#26 U.S. Adult Contemporary charts) and WTF.