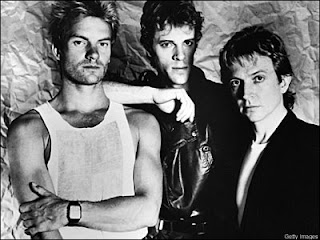 The Police were an English rock band from London, formed in 1977. The band consisted of Sting (lead vocals, bass guitar), Andy Summers (guitar, vocals) and Stewart Copeland (drums, vocals, percussion). The Police became globally popular in the late 1970s and are generally regarded as one of the first New Wave groups to achieve mainstream success, playing a style of rock that was influenced by jazz, punk and reggae music. The band broke up in 1984, but reunited in early 2007 for a one-off world tour lasting until August 2008, in celebration of the 30th anniversary of their hit single "Roxanne" and also, to a lesser extent, their formation as a group. The Police have sold more than 50 million albums worldwide, and became the world's highest-earning musicians in 2008, thanks to their reunion tour. 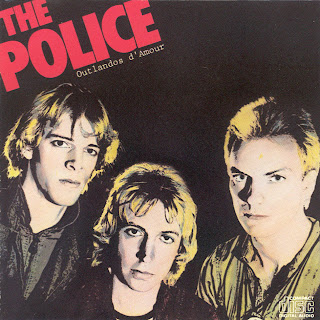 Outlandos d'Amour is The Police's debut album, released on November 2, 1978. The LP initially flopped, due to low exposure and an unfavourable reaction from the BBC to its first two singles, "Can't Stand Losing You" and "Roxanne" (about suicide and prostitution, respectively). Police manager Miles Copeland III originally wanted to name the album Police Brutality. However, after hearing "Roxanne" and then envisioning a more romantic image for the band, he proposed Outlandos d'Amour instead. This title was derived from "Outlaws of Love", which was merged with the word "commandos" and then given an exotic-sounding French translation. In 2003, the album was ranked number 434 on Rolling Stone magazine's list of the 500 greatest albums of all time. The album charted to #6 in the U.K. (Platinum disc) and #23 in the U.S. (Platinum disc). The singles taken from this album were: Roxanne (#12 U.K., #32 U.S.), Can't Stand Losing You (#2 U.K.) and So Lonely (#6 U.K.). 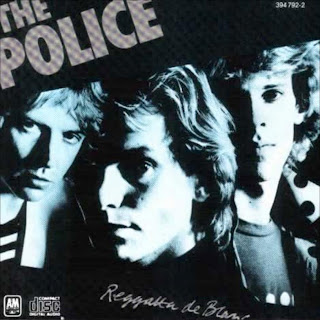 Reggatta de Blanc is The Police's second studio album, released on October 5, 1979. The album took only a few weeks to record, spaced over several months. However, unlike its successor - Zenyattà Mondatta - there was no pressure on the band. As Stewart Copeland describes it, "We just went into the studio and said, 'Right, who's got the first song?' We hadn't even rehearsed them before we went in." In 2003, the album was ranked number 369 on Rolling Stone magazine's list of the 500 greatest albums of all time. The album charted to #1 in the U.K. (Platinum disc) and #25 in the U.S. (Platinum disc). The singles taken from this album were: Message in a Bottle (#1 U.K., #74 U.S.) and Walking on the Moon (#1 U.K.). 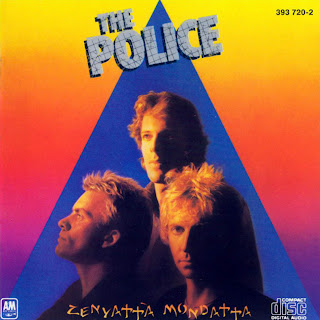 Zenyattà Mondatta is The Police's third studio album, released on October 3, 1980. Written during the band's second tour and recorded in four weeks (minus several days for concerts in the U.K.- Milton Keynes festival - and Ireland). The band members have often expressed disappointment over it, going so far as to re-record two songs during a brief, unsuccessful reunion.As mentioned by Copeland, the Police embarked on a tour of the world the day of the album's completion, beginning in Belgium and reaching places such as India and Egypt. Zenyattà Mondatta is also notable for containing the band's first lyrics ever referring to political events, with Sting's "Driven To Tears" commenting on poverty and Copeland's "Bombs Away" referring to the Soviet invasion of Afghanistan. These themes would become more prevalent in the Police's next album, Ghost in the Machine.Copeland has claimed that the group arrived at the album's title after deciding it should roll off the tongue. Rejected titles included Caprido Von Renislam (referring to the street, Catharina van Renneslaan, where the studio was located) and Trimondo Blondomina (suggesting three blonds dominating the world). Zenyattà Mondatta are invented portmanteau words, hinting at Zen, at Jomo Kenyatta, at the French word for the world ("le monde") and at Reggatta, from the previous album's name, Reggatta de Blanc. The album charted to #1 in the U.K. (Platinum disc) and #5 in the U.S. (2x Platinum discs). The singles taken from this album were: Don't Stand So Close to Me (#1 U.K., #10 U.S.) and De Do Do Do, De Da Da Da (#5 U.K., #10 U.S.). 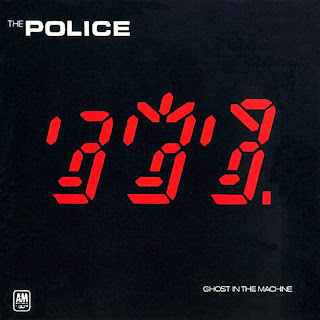 Ghost in the Machine is The Police's fourth studio album, released on October 2, 1981 on the same day of Sting's 30th birthday. Much of the material in this album was inspired by Arthur Koestler's The Ghost in the Machine, which also provided the title. It was their first album to bear an English language title. The album was listed #322 on Rolling Stone's 500 Greatest Albums of All Time. In 2000 Q magazine placed Ghost in the Machine at #76 in its list of the 100 Greatest British Albums Ever. Pitchfork Media ranked it #86 in their list of the 100 Greatest Albums of the 1980s.The cover art for Ghost in the Machine features a seven-segment display-inspired graphic that depicts the heads of the three band members each with a distinctive hair style (from left to right, Andy Summers, Sting with spiky hair, and Stewart Copeland with a fringe); the band was unable to decide on a photograph to use for the cover. Interestingly, wire bonds can be seen on the original issue vinyl album cover, suggesting that the display is custom rather than merely seven-segment or perhaps is a photographic collage. The album's cover is ranked at number 45 on VH1's 50 Greatest Album Covers. The graphic was designed by Mick Hegarty. The album charted to #1 in the U.K. (Platinum disc) and #2 in the U.S. (3x Platinum discs). The singles released from this album were: Invisible Sun (#2 U.K.), Every Little Thing She Does Is Magic (#1 U.K., #3 U.S.), Spirits in the Material World (#12 U.K., #11 U.S.) and Secret Journey (#46 U.S.). 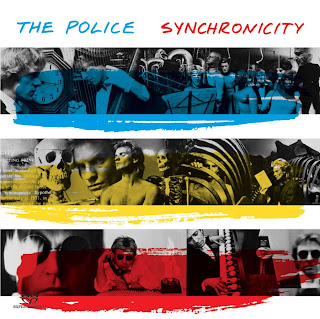 Synchronicity is The Police's fifth and last studio album, released on June 1, 1983. The album's title was inspired by Arthur Koestler's The Roots of Coincidence, which mentions Carl Jung's theory of Synchronicity. Sting was an avid reader of Koestler, and also named Ghost in the Machine after one of his works. The album marked a significant reduction in the reggae influences that were a part of the band's first four records, instead featuring production-heavy textures and liberal use of synthesizers that, at times, drove entire songs ("Synchronicity I", "Wrapped Around Your Finger"). The influence of World music can also be heard in songs such as "Tea in the Sahara" and "Walking in Your Footsteps". Sting's material dominates the album, with the two short tracks by Andy Summers ("Mother") and Stewart Copeland ("Miss Gradenko") being seen by the band themselves as concessions. As with their prior album, the basic tracks for Synchronicity were recorded at AIR Studios, Montserrat. For sound engineering reasons, the three band members recorded their parts in separate rooms: Copeland with his drums in the dining room, Sting in the control room, and Summers in the actual studio. This physical separation underscored the increasing tension and strain in the relationship between the bandmates. According to co-producer Hugh Padgham, subsequent overdubs were actually done with only one member in the studio at a time due to such strain. During the recording of "Every Breath You Take", Sting and Copeland actually came to blows with each other, and Padgham nearly quit the project.It won a Grammy Award for Best Rock Performance by a Duo or Group with Vocal. In 2001, the TV network VH1 named Synchronicity the 50th greatest album of all time. In 2003, the album was ranked number 455 on Rolling Stone magazine's list of the 500 greatest albums of all time. Pitchfork Media ranked it #55 in their list of The 100 Greatest Albums of the 1980s. In 2006, Q magazine placed the album at #25 in its list of "40 Best Albums of the '80s". The album charted to #1 both in the U.K. (Platinum disc) and in the U.S. (8x Platinum discs). The singles spawned from this album were: Every Breath You Take (#1 U.K., #1 U.S.), Wrapped Around Your Finger (#7 U.K., #8 U.S.), Synchronicity II (#17 U.K., #16 U.S.), and King of Pain (#17 U.K., #3 U.S.). 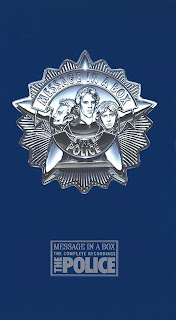 Message in a Box is a four-CD boxed set by The Police, released on September 28, 1993 which contains all of their studio albums in chronological order, as well as singles, B-sides, and tracks from various compilation albums and the Brimstone and Treacle soundtrack. However, the only tracks that will be uploaded for the blog are the ones that don't form part of their studio albums.

Hey, people!! How are you doing? I just wanted to tell you that I'll be away for a week so I won't be here to upload or make any updates during a whole week. I'll be back with you next Tuesday. Thanks for your understanding!! :) :)